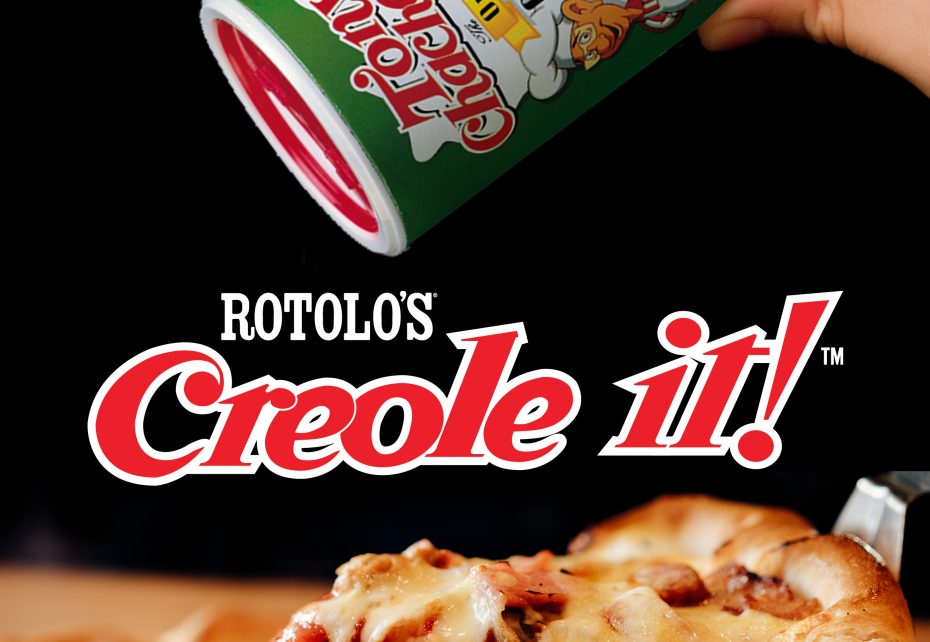 Opelousas, LA – What do you get when you combine the flavors of Tony Chachere’s® Famous Creole Cuisine with Rotolo’s fresh-daily Italian pizza? You get Rotolo’s Creole it!TM pies.

“As we celebrate 50 years, we want to find unique ways to highlight the flavors of Tony’s while partnering with other Louisiana companies throughout the year,” said Celeste Chachere, Director of Marketing & PR for Tony Chachere’s. “Sprinkling Tony’s on your favorite slice is something people do all the time, and we thought this partnership with Rotolo’s was the perfect way to surprise and delight people with a unique taste experience.”

“Local partnerships of flavor such as this are all about showcasing the tastes of Louisiana and the pride we share in creating foods people love,” said Mitch Rotolo, Founder of Rotolo’s. “Our limited time Creole it! TM menu is fresh, delicious and unique; with pizzas and calzones that our customers are eating up. This campaign has been a successful driver of Dine-In guests as they have wanted to get their hands on the limited edition, Tony’s inspired Rotolo’s cup as well as try the new menu items.”

Guests can add Tony’s seasoned garlic butter to any pizza crust or calzone and will also find cans of Tony’s Original Creole Seasoning on the tables at all Rotolo’s restaurants, so they can add Tony’s flavor to any dish.

Rotolo’s first opened in 1996 in Baton Rouge, near the Louisiana State University campus. The casual Italian restaurant prides itself with making all its items fresh daily. Now a successful franchise, Rotolo’s has locations across Louisiana, southwestern Alabama, eastern Texas, in the Florida panhandle, and in Memphis, Tennessee, with more locations in the works.

Tony Chachere’s® Famous Creole Cuisine is celebrating its 50th Anniversary! Founded in 1972 by Tony Chachere, the “Ole Master” of Creole cooking, Tony’s continues to be family-owned-and-operated in Opelousas, Louisiana. The Louisiana family has carried on the tradition of authenticity and flavor through its line of seasonings, marinades, dinner mixes, salad dressings and more for both pantry and table.