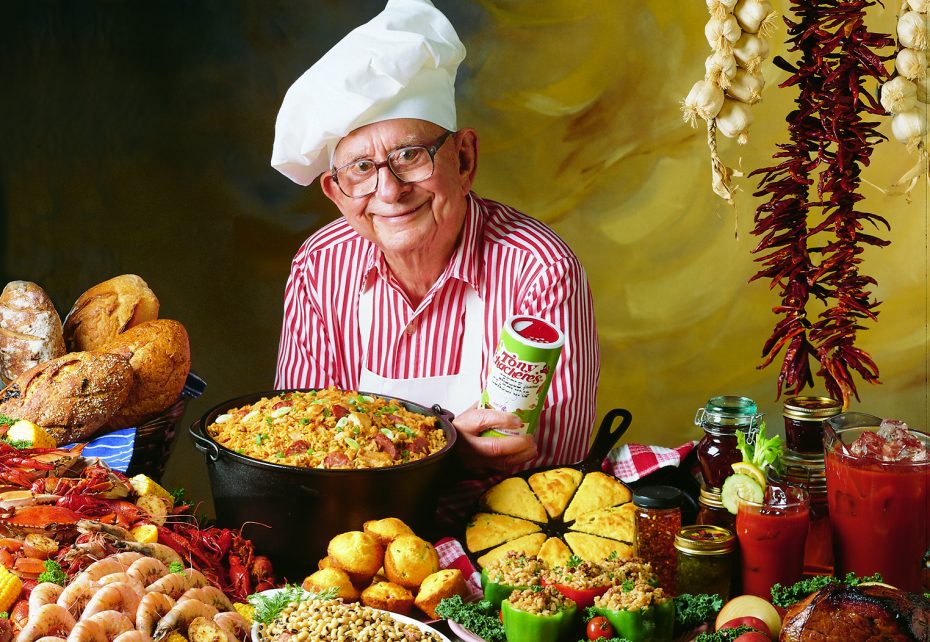 Opelousas, LA – Tony Chachere’s® Famous Creole Cuisine is celebrating its 50th Anniversary! 50 years ago, the company began as a retirement hobby and a life-long dream come true for the company’s namesake, Tony Chachere. Mr. Tony was a noted sportsman, chef and bon vivant of Opelousas, Louisiana. Known as the “Ole Master” of fine Creole cuisine, Mr. Tony lived to cook. As he made his unsurpassed culinary delicacies for friends and family, he’d exclaim, “tonight, I’m gonna make ‘em cry,” and always dreamed of one day writing a cookbook full of recipes of his beloved native cuisine.

In 1972, after Mr. Tony retired for a second time, the 65-year-old did just that – writing and publishing his now infamous Cajun Country Cookbook. He sold the first 10,000 copies out of the back of his station wagon within weeks. Among the many recipes in the book was that of his favorite homemade seasoning, and Gulf Coast residents began asking where they could buy his trademark blend. Before he knew it, Tony Chachere’s Famous Creole Cuisine was born.

Mr. Tony semi-retired (again) in 1981, at the age of 76, though he continued to develop new products and perfect his recipes.

Mr. Tony’s famous seasoning has been used in dozens of cookbooks, cooking contests and even a couple of movies. In March 1995, Mr. Tony was honored as the first inductee into the Louisiana Chefs Hall of Fame. He passed away one week later; three months shy of his 90th birthday (June 14). Tony Chachere lived a legendary life and will always be remembered as a man who was “at home” with everyone who knew him.

Now, 50 years after the company’s inception, the Chachere family maintains a tradition of Creole/Cajun authenticity in every recipe and product. The nationally recognized brand is still family-owned-and-operated, led by multiple generations of the Chachere family. With Mr. Tony’s grandson Don at the helm, the company has reached new heights. It is still operated in Opelousas, Louisiana, but now in a 150,000 square-foot facility with more than 100 full-time employees.

“What started as my great-grandfather’s life-long dream has now become a devoted mission for four generations of the Chachere family,” said Celeste Chachere, Director of Marketing for Tony Chachere’s. “Making the flavors of his beloved Cajun and Creole cuisine accessible to the world beyond Louisiana is what Mr. Tony was most passionate about, and we are continually looking for new ways to bring more flavor to every meal people eat, just as he always dreamed.”

As part of the celebration, pick up your commemorative can of Tony’s Original Creole Seasoning. Order it now at tonychachere.com.

Tony Chachere’s® Famous Creole Cuisine is celebrating its 50th Anniversary! Founded in 1972 by Tony Chachere, the “Ole Master” of Creole cooking, Tony Chachere’s® continues to be family-owned-and-operated in Opelousas, Louisiana. The Louisiana family has carried on the tradition of authenticity and flavor through its line of seasonings, marinades, dinner mixes, salad dressings and more for both pantry and table.